Got hold of a DJI Osmo plus off ebay, was supposed to be working but on turn on the Yaw axis smashes full left and right and then whole gimbal goes limp with bleeping

, but the camera itself works fine in the app. 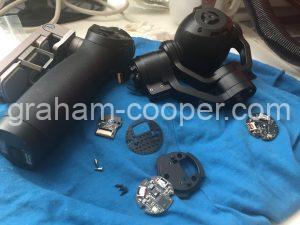 The chip I am interested in first , is the one that senses what position the motor is in,

There is a small magnet positional nut under the board which I suspect the chip senses what position its in.

Because mine smashes left and right, I assume either chip is faulty or data from or to chip.

Looking at the chip it looks suspect? 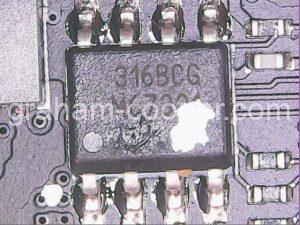 and which is working fine on tilt axis of camera.

Although looking at both boards, does seem these chips were added after the other chips etc

Because of the extra flux. Maybe they all done like this or these boards were refurbished ?

They are easy to get from china, but I think this chip has a eeprom inside and hence may well be programmed at DJI to the camera. So fitting a new one may well prove a waste, but they are cheap so might as well try.

Cant get the whole driver board and even if one could, probably need to be matched to camera.

Probably easier to get a working one as price of these cheap now due to the Osmo pocket’s.

Anyway , another project waiting with other bits I am waiting on parts from China for.

I fitted a new chip (BCG 316BCG) to the pcb and to be honest, although it stopped smashing the gimbal from side to side on power up, it now just jitters left and right a bit and stops with very hot yaw motor after a few goes.

Could be not correct chip or motor windings are toast.

This entry was posted in DJI Osmo+, Radio Control Models. Bookmark the permalink.