Another Wingsland S6 user contacted me and was mentioning about some replacement battery cells for the S6 which sounded interesting.

That was that Aliexpress had some cells on there from ROGRAPO Global Online Store which are upgrades from the 1400mah ones the S6 came with to ones which are 2150mah.

These worked out for me shipped including UK taxes and postage at £35.16 for 4 cells and hence to able to upgrade 2 batteries.

They took 1 month from ordering to me receiving them in the UK. 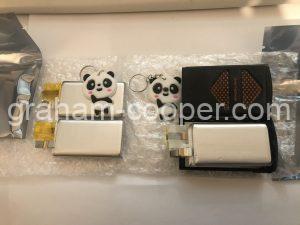 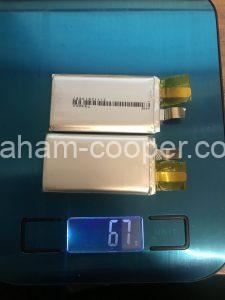 and also how quickly they drop from 100%. I assume they will drop very quick the first min of flight if they are a low C rating.

A bit too cold out where I am at present to test to get a realistic review of these new cells.

But one thing for sure, this is a much easier and better way of upgrading the old cells in a Wingsland S6, and because there is no smart battery circuit inside S6 battery there is no

reprograming of the battery to be done.

Of course the battery casing on these was never designed to be split apart and rebuilt and most of the time the clips on the case will snap apart.

So this is a solution to getting working batteries if you can use a soldering iron and have the skills to do this safely or know someone who can solder these in for you.

Will do a update once weather gets a bit warmer.

And of course in this day and age of some looking to blame someone else if they mess this up, the normal DONT do this unless you know what you are doing or as with all lipo cells they can catch fire if punctured or shorted or mistreated!

Got my hands on one of these unique quadcopters. 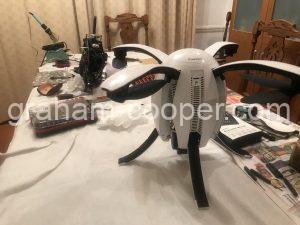 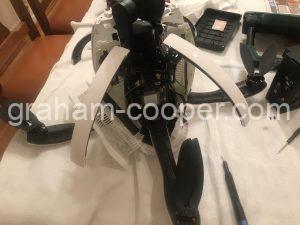 Condition was unknown and so a risk, and it came with no battery which is a royal pain as getting batteries for this is only possible from Aliexpress.

Anyway once battery arrived , plugged it in a all fired up okay but it will not connect to the app and can now see why it came with no battery.

Got onto Powervision and they did reply back with a reset method to re bind the craft to the wifi repeater , but after many many times of trying it still wont connect.

I took the repeater apart and managed to solder on 3 wires and red the console in via UART. :- 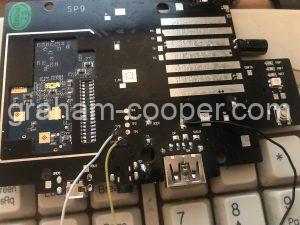 And seems its based on the Pixhawk

I can see on the startup console that when I do a bind it says Link Success but does not show link on repeater or app.

But what I did notice was it has loads of errors on camera like:-

So I am wondering is there a issue with video from camera and fails to link to repeater and app because of that?

Because there is no video being sent????? Or is there a fault with the repeater or the Transmitter module on the Egg itself????

Cant really go any further on this with out another one to compare it with.

So will just be a pretty ornament on shelf for now 😉

Sorry been a while since I posted anything due to lack of time.

But anyway, picked up a non working Thunder tiger Raptor 90.

Not played with Heli’s for some years now due to getting into electric quadcopters, but I did miss messing about with glow engines and thought its about time I had a go again.

Always wanted a 90 Raptor back in the day and when one came long cheap due to non working and also not much interest in Nitro craft these days.

Not been run for a few years and engine will now not start.

So first thing is to remove the engine and strip it down and see what’s up. 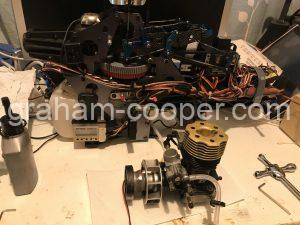 First hurdle was getting the exhaust and manifold off , screws were extremely seized solid, may be down to the amount of thread lock on them or just how many years they been on there. So after some heating , I eventually got both parts removed.

Then I removed the head and was surprised at the lack of build up on top of piston, I dont think this engine run that much before it was put in storage. 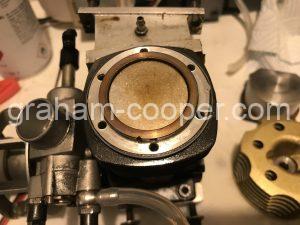 Once I removed the back plate, the inside did not look very well at all, it was covered in baked on old fuel or rust and looked very sad.

Got the piston liner out and removing the cod rod was tight due to the build up of crap, but got it out and removed the piston and could then see the ring had seized closed on piston with sign of score marks on one side. 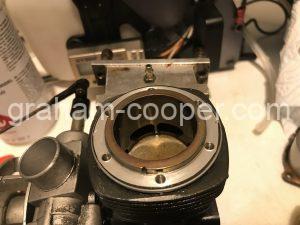 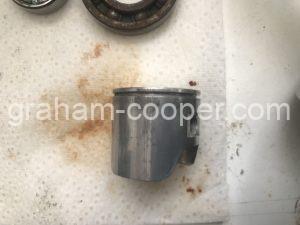 What I think may of happened is heli been into storage for a while and ring almost seized  with old oil/fuel and then it was attempted to be run again and caused the damage as it was not cleaned out after long time not running? Or maybe last run was too lean?

The piston used on a later model of engine had holes in top which were I guess to feed piston ring and maybe a known issue on this model? maybe thats why it seized and scored up liner?

Think this engine/heli was new around 2006 and so I guess its a bit of a stretch hoping to get all parts in 2022, some 16 years later and think all thats left is just what son the shelf of some stores.

Be cheaper to obtain a used one or just replace with different engine. 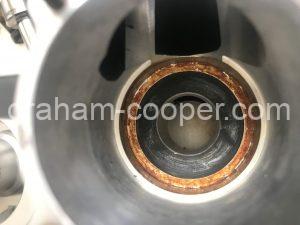 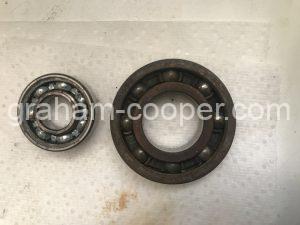 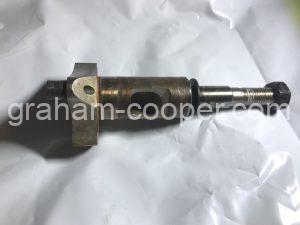 The bearings are a mess and getting a new set from https://www.modelfixings.co.uk/

who do them for a good price. 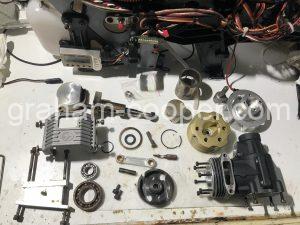 So while I am waiting for parts, gives me the chance to clean all the parts up.

and using that on both crankshaft and piston and exhaust and brings them up really well. 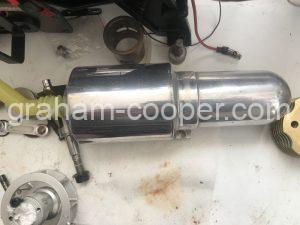 Getting all parts whether for engine or heli itself will always be a challenge on a old model.

Still a few bits around , but for sure need to make sure I dont crash it or it will be history.

I am not into 3d stuff so just to plod around.

Very enjoyable though to mess about with a glow aircraft again after many years with quadcopters.

I love my quads , but something nice about a craft with real engine in and being a heli its very mechanical which appeals to me.

There is a flying field not too far from me which I will have to join when I sort this out and want to fly it.

Anyway, waiting on parts now before I can go any further….

Just a small update for the ole Wingsland S6.

It seems the wingsland app has now been removed from the apple store and the android store.

Seems like its the end of the road for this great looking but very flawed quad.

You can find the old Android app on some other backup sites around on web, and I have a few of them in the download area of wingsland on here.

Also I see places like Banggood no longer selling it and getting a new battery probably almost impossible now, along with original props etc.

These days you can pick up a cheap DJI mavic mini cheap or pay a bit more for the mini 2 and those are a far better bet in 2022 for a small quad, or one can also pick up a old DJI Spark for really cheap these days (Just make sure you get one with 3 batteries as the batteries are  getting hard to get hold of at a decent price.)

Obviously the DJI Spark is over 250 grams, but then so was the Wingsland S6 and the Spark also only has a 1080p camera.

DJI has released its latest firmware update (v01.04.0000) for the mini 2 quad and BEWARE , as the latest version has anti rollback enabled!

That means you wont be able to downgrade the firmware to any earlier versions and I would guess this was done to stop some of the hacks available, although update states

the update was for safety 😉