Just got hold of one of these discontinued Onagofly’s.

Just curious really as all the reviews back in the day were terrible. 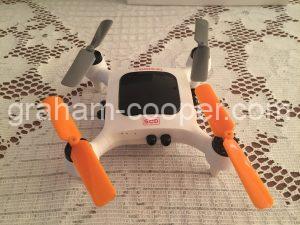 Another pic compared to Wingsland S6 for size.

Its weighs about 200 grams, so at least does not need registering in the Uk (at present) The battery is a 800mah 2s lipo inside the quad and charged from a lead underneath into the Onagofly supplied charger.

First thing I done before flying was to load up mission planner and do the Accelerometer calibration and level one and then into the compass and do that too.

Dont know if this is needed as it might be self checking this on every boot, but done it anyways.

Risked a flight indoors, and took off okay and jumped up about 6/7 feet and then settled down a bit lower than that, but it wanders around a lot and controlling this by the phone was tricky and laggy.

The Onagofly app will not run on my iphone 6 with ios 12.4 , it crashes all the time.

So had it running on a iphone 5 with ios 10.3.4, which worked okay apart from being extremely laggy, even with video view settings set lower on app.

I did try a small tethered test outside and it took off and went to fly back into the wall , but as I had it terthered on a bit of string, was able to yank it back and then it caught up in string and ended the test.

It did show on app and via blue lights on craft it has gps lock, but as this shows at locked with 6 gps Sats, me thinks that not enough for this craft and needing at least 8+ would make more sense.

So pretty much un useable via the app as far as I am concerned, but I know there are some ppm pads inside to connect a normal rx receiver, so that is the next thing I shall try.

So onto some mods next.

This entry was posted in Onagofly, Radio Control Models. Bookmark the permalink.