Carrying on my testing after getting hold of a insurance write off Mavic Pro Platinum that landed/crashed into the sea.

Now time to test the esc board and after much cleaning with fresh water and removing the salt deposits and then cleaning with switch cleaner any remaining residue .

I connected it up to start with a 18650 cell , as wanted to see if anything got hot or it drew a lot of amps.

All seemed fine and even the motor led came on.! 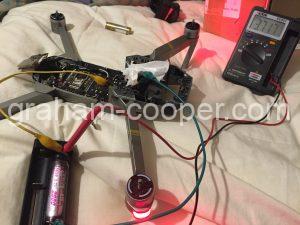 Then tested with a 2s 18650 pack and this time the dji start up esc tones came through.

Then a final test with the original mavic battery pack minus the battery pcb as thats history.

Apart from the startup tones, all 4 motors twitched as they should normally do.

One thing for sure, one of the motors has totally useless bearings as spining it in a small hobby drill attached to the shaft , its as noisey as hell the other 3 sound okay although will replace the bearings anyhow.

So hopefully this is a sign the esc board is possibly okay? Will be pretty amazing if it is after landing in the sea and then had its battery left in it and sat in a insurance office for god knows how long festing away.

Do wonder if this hit the sea after the motors had already stopped? as the mosfets on the esc seem to be okay. I would expect them to blow normally with motors running hitting water.

Also amazing the lipo which was reading 0.4 volts total when I got it and it charges all the way back up and seems to have decent life in it apart from 1 cell which after 2 days drops to 0 volts again, but other 2 cells stay put. Intresting as a test and nothing more, will never be used in flight again.

The gps board that I had plugged in was sending a charge to its onboard backup battery, but to see whether it actually survived will need the main board connected.

Next thing will no doubt be the main board and that was in the worst condition , as it has salt deposits all over it and has had lots of cleaning, especially to connectors which were badly oxidised. I dont expect this to work , but will test it anyways as long as I dont find any shorts on the boards first.

Links below to other posts on this project.