I have always liked the old windows phone and when I found a cheap Elite X3, thought it was well worth getting even though the platform is dead now. 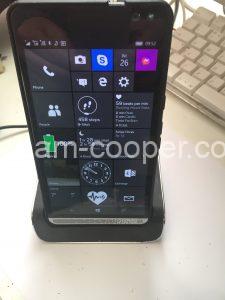 Been using it for a couple of months now and still like the live tiles which is very different to Android and IOS. Yes there are hardly any main stream apps anymore that work on it.

But for what I use it for, I can mostly get around that using web versions.

Nice big screen for my old eyes, but not very bight outside.

Biggest issue I ran into is it lags a lot, which surprised me as it was the last flagship phone and expected it to be quite snappy. But after a few days its seem to really bog down between switching apps and locks up a fair bit, which means it needs a reset. Also fingerprint login and Face recognition are both very slow.

The Dock and continuum was a nice feature, but I also found using that to be a bit laggy too when I tried it.

Makes you wonder with today’s hardware if Microsoft had not killed the platform, could have been a nice alternative to the others still.

But just like the Microsoft Band 2 which I really liked, Microsoft killed both off.

This entry was posted in Technology, Uncategorised. Bookmark the permalink.