Well done a few flights with my S6 now.

First off  even though this is the S6 V2 Advanced edition, DO NOT TRY AND FLY THESE INSIDE!

First 4/5 flights I tried indoors , the quad took off and flew straight up into the ceiling!

Chipped all the props and put scratches on the top of the quad.

Even on this version , the sonar and position flow is not working (presumed disabled in the firmware)

Tried it outside and it shots up around 10 feet from take off and then drops down a bit and settles. (That explains why it hit the ceiling in my house)

On my model the camera does not work most of the time, I just get a blank screen, although it will still take off and fly but wont record anything , as it does not sense the camera.

I tried loads of different SD Cards and formatted them from within the Wingsland app and still it only works about 1 time out of 10.

So I defiantly have a faulty unit.

Just not worth the hassle to send it back to China and so I will end up just taking it apart and seeing it it has a iffy connection etc.

Seems to be between 5 to 6 mins max before it autolands.

It’s using 1100 mah from battery for those flights.

End voltage after a flight seems to be around 3.74 volts per cell , so I am guessing this lands at 3.6 volts a cell.

I need to connect something up to see just what is the critical landing voltage, but seems they are being too cautious on low battery voltage unless its a really low C lipo and its landing at around 3.3 per cell under load?

Did not fly too well due to being too big, but they just about fitted and was curious what they would do to the flight time.

Was a tad longer as it turned out, but have some better props on the way to test , as I think with better props and modding the battery maybe I can push this to a more reasonable 12 mins flight time at least. 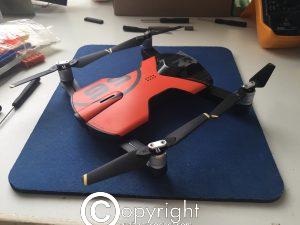 Anyway, had a wind free slot in weather yesterday and it flew really well and camera actually worked for a change!

It took off to about 10+ feet and I left it with no inputs until auto landing.

So in no wind , this flys well apart from the low flight time.

I think Wingsland should have made a extended battery for this.

I guess because battery fits inside quad the changes of ever seeing that , even from third party are very slim.

If they could have worked on the firmware to make it more reliable and got the sonar and position flow working and given it a flight time of about 12 mins , they would have had a far more successful Quad!

Most of the reviews on these are terrible and I feel a lot of the issues could have been fixed by more firmware upgrades.

But although the app was updated recently, I doubt we will see any firmware upgrades.

It looks really cool and the packing and presentation is excellent.

Real shame and it seems they are no longer sold now with stores just selling off what stock they have.