At last I found some upgraded cells that give almost the advertised 10 Minutes flight time!

Note this is actual flight time from take off to auto-land at 0% .

There is a big but with this though as you will see. 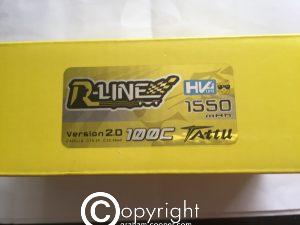 As these are 100C the cell thickness was really a tad too much for a nice fit inside the S6 battery compartment, but as this is only a test I undone the screws a bit to get it in and out. Width wise is fine, just the height a 1/2 mm too much really.

Does not look pretty , but only testing. 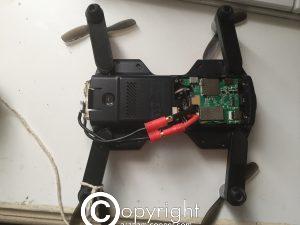 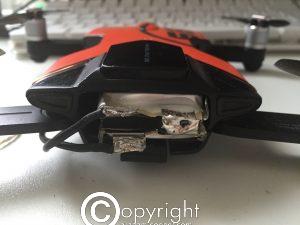 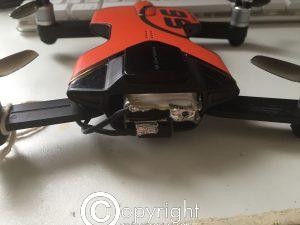 The string on the arm is just to tether it, in case it does some strange and flys off, while testing in back yard 😉

But the actual flight time from take off to landing was 9 mins 30 seconds!

But as I pointed out earlier a couple of times, this is just flight time and not time from when you hit the record button as that is always longer.

I took off at 7 seconds into recording and time was noted from then til auto land at 0%. 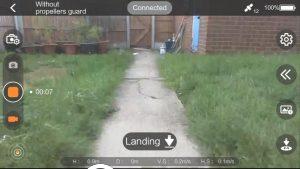 At 30% low battery warning after 8 mins 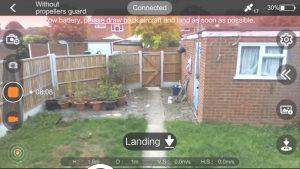 And finally landed at 9 mins 37 seconds , but – the 7 seconds before take off at start gives 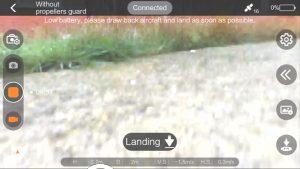 So that is the longest flight time I have managed thus far with the Wingsland S6 and very close to the advertised 10 mins!

Normally with mine with a standard Wingsland S6 battery I get 5 mins 30 seconds actual flight time before auto-land.

But as you can see above, I had to use over size cells of 1550mah and 100C and so fitting them in the available space is a task indeed and also running wires underneath to connect to the lipo.

I flew without the sonar and position flow camera attached as in the photo.

This makes no difference as although this is  the advanced model, none of these V2 S6’s have the sonar or position flow as those features were never added, so makes no difference with that hardware removed. (Unless in the extremely unlikely event Wingsland ever work on any updates.)

But from what I heard from many others is the Wingsland S6 was abandoned , so no hope of any updates now. (Last firmware update was Novemeber 2017)

So we are on our own to try and improve it.

Shame as I still feel this quad looks great and was totally let down by no software development, or hardware would not work together or maybe person working on software left the company or a licensing issue. Who knows…..

I have a Wingsland R6 controller on its way from Banggood (Normally always out of stock) and also some different motors I will be trying out next to see what we can do to this quad.

Why bother some have said to me? Well I like a challenge and I am just interested to see how far one can push this abandoned little quad 😉