Well after trying out some Master Airscrew props on my Spark, I got some V2 props for my old Air. 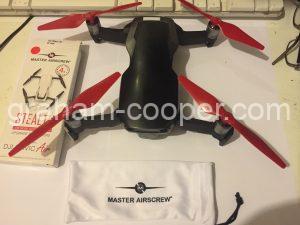 Again I went for red in the hope just maybe it would put the seagulls off a bit? Probably not , but worth a try as because I live near a beach.

Anyway, tried a test hover inside and like the Spark versions they do have a lower pitch , so not quite so anoying, athough the standard noise does not bother me after years of nitro engines screaming 😉

What I am more intrested in with these props for the Air is they claim they give better flight time.

With the stock props and same battery I got 13:13.

So approx around roughly 10% more and about an extra 1:30 mins, so seems well worth the extra price for a bit more flight time.

I think I should get better even as stock, but this was a old air that crashed into a river that I repaired and compared to other mavic air’s , mine dont seem to have the same flight times. I need to replace the bearings at some stage as that might be whats causing mine to be less than most others..

Still as with all DJI quads, another nice quality craft and as always holds position perfect when flying indoors.

I did say in a previous post that the DJI Spark was a good buy if you can get one cheap with spare batts, but it also seems the price of these first gen air’s have fallen a lot too now.

So this could be a good buy too and not too much more expensive than a Spark, and at this moment in time you can still buy new batts from DJI’s store!

Downside I dont like about the Air is DJI changed the encryption keys on the air and so you cant tinker with internal settings like you can do on the spark and also cant downgrade either if you on one of the latter firmwares which most are on thesedays.

I do like the look of the this older Air and its solid built too. Flight time not a big upgrade over the Spark, but it is a 4k camera and 3 axis gimbal and can handle the wind better.