Wingsland apps back in Apple store

Surprised to see Wingsland aps make a return to the app store after being missing in action for quite some time on IOS.

Also a update for the Wingsland S6 on IOS?

Seems to be just a updated certifcate for the app by Apple rather than from Wingsland themselves??

as the bits below that are from the last time it was updated….. 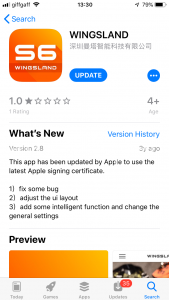 Either that or my iphone confused and its just exactly the same app from 3 years back.

Anyone else got a update flagged for there S6 on IOS?

I think this update is just directly done by Apple for old apps, as quite a few of my old apps are saying the same.