After rebuilding a S6 battery with the Hyperion G6 1400mah LiHV cells this is a test from 100% to auto landing at 0% using stock props.

To cut to the chase I got 7 mins 48 seconds of actual flying time.

The S6 and the battery pack were taken outside and no warming of pack or craft prior to hover test.

I would expect maybe a tad longer flight times if flying around in forward flight.

But still a pretty good upgrade of getting more flight time and this G6 version of the hyperion cells seems to last better than the Hyperion G7 graphene pack I tried before.

I did also do a test with some Simtoo XT175 props, but although you can get even longer with those props, twice including my last test with these the props broke apart mid air.

Below photo of the one broken prop I did find after it hit the deck and you can see where it broke apart. 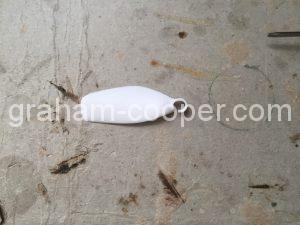 I do have other props on the way which might work, shall update when they arrived and I tested them.

In the meantime, below is the video of my test flight. Rather boring as just a hover and video recorded off screen on a iphone 6 and hence not very good quality, but for those that want to see the % drop of battery over those almost 8 mins.