Well I had to say fairwell to the motherboard!

Sadly there was another short around the CPU area and the Power management chip had also failed on this board. 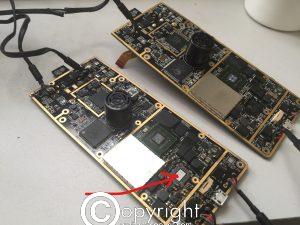 After removing the underfill around the chip, it was removed and there was some corrosion under the chip.

Sadly I had to give up on this motherboard as there was a good chance there was more damage with the remaining chips.

So I moved onto a spare board I had which was also faulty, but a very easy repair in that this other one just needed a new motor wire and a wifi sma plug soldered back onto the board, which was taken from the water damaged board.

So now onto putting the board back in the Bebop 2 along with the original water dipped main camera, motors , downward facing camera and gps board and motherboard fan.

On power up the red led on back just flashed and there was no motor esc sound or the board fan spinning.

To cut a long story , I found there was a short on the UBlox chip , the vcc power line was short to ground. Hence as the bebop needs to read the barometer from the gps board and it could not, the board would not boot.

So I did wonder what would happen if I removed the GPS chip? 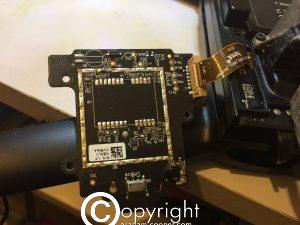 So I removed the chip, and plugged the GPS board back into the bebop and it did indeed boot with the esc sound and also the motherboard fan spinning and going from flashing led to solid.

I could connect via wifi to the Bebop and the main camera was working fine!

I kinda felt that might be toast, but was working fine , as was the other original water dipped parts.

I then tried out a test flight which it took off and held hover via position hold from sonar and downward camera indoors well.

I was not sure whether with no GPS chip, it would work to be honest.

But I guess with no gps chip, the bebop just checks for GPS signal and with no chip it assumes inside with no satellites etc.

For my next test , I tried outside and the flight time from 100% to 0% landing was around 14mins.

A video I made is below.

To to recap, to get this salt damaged Bebop 2 working again needed :-

So if one was buying new parts = uneconomical repair! Just buy a new one!

I was lucky enough to have another faulty main board , but not to much effort to repair.

Also I am running the GPS board without the Ublox gps fitted.

My next steps with this will be to try to fix the GPS board and also test out some new LG 3000mah 18650 cells as a flight pack.

This entry was posted in Bebop 2. Bookmark the permalink.